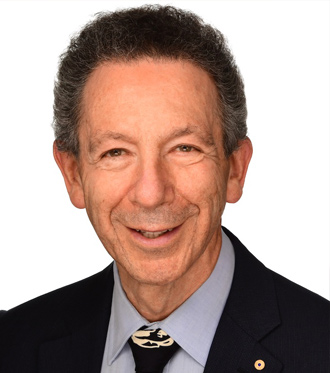 Having graduated from the University of Sydney, Clinical Professor Ivan Goldberg became a Fellow of both the Royal Australian and New Zealand College of Ophthalmologists (RANZCO) and the Royal Australasian College of Surgeons. Prof Goldberg completed a Glaucoma Fellowship and then became a Faculty member in the Department of Ophthalmology and Visual Sciences at the Washington University School of Medicine, St Louis, United States prior to returning to Australia.

Working closely with Prof FC Hollows, Prof Goldberg was Director of Glaucoma Services at Sydney’s Prince of Wales Hospital. As well as caring for patients, he taught and pursued clinical research activities and educational projects. This work continued when he transferred to the Sydney Eye Hospital, where for 10 years he was Chair of the Glaucoma Unit.

Further Awards followed, such as the Bartisch Medal from the University of Dresden, the position of Honorary President of the 7th International Congress of Glaucoma Surgery in Singapore, delivery of the Podos Lecture for, Icahn University at the Mt Sinai Hospital, New York Academy of Medicine, the College Medal of the Royal Australian and New Zealand College of Ophthalmologists. Glaucoma Australia appointed Prof Goldberg its first Foundation and Life Member in 2017 and the following year, made him its first Life Governor.

Together with Ms Kathleen Holmes, OAM, Prof Goldberg founded Glaucoma Australia in 1988, the association of which he became President in 2011. For this and his other activities, he was awarded a Medal of Australia (AM).

Within the Asian region, Prof Goldberg’s experience and knowledge in the field of glaucoma have been recognised through election as the Founding President of the South East Asia Glaucoma Interest Group (SEAGIG) and as an Executive Committee member of the Asian-Oceanic Glaucoma Society. Prof Goldberg chaired the Working Party of SEAGIG that wrote both the first (2003) and second (2008) Editions of the Asia Pacific Glaucoma Guidelines. Closer to home, Prof Goldberg’s contributions to Australian ophthalmology and the RANZCO were recognised in 2001 by election as President of this College.

Currently Prof Goldberg consults with patients at Eye Associates in Sydney, is part of the Glaucoma Unit and Visiting Honorary Ophthalmologist at the Sydney Eye Hospital, as well as Clinical Professor at the University of Sydney. Pre-COVID, Prof Goldberg travelled extensively, both nationally and internationally, to teach. He collaborates in educational and research activities with fellow glaucoma subspecialists around the world.